Renderscript offers a high performance computation API at the native level that you write in C (C99 standard). Renderscript gives your apps the ability to run operations with automatic parallelization across all available processor cores. It also supports different types of processors such as the CPU, GPU or DSP. Renderscript is useful for apps that do image processing, mathematical modeling, or any operations that require lots of mathematical computation.

In addition, you have access to all of these features without having to write code to support different architectures or a different amount of processing cores. You also do not need to recompile your application for different processor types, because Renderscript code is compiled on the device at runtime.

Deprecation Notice: Earlier versions of Renderscript included an experimental graphics engine component. This component is now deprecated as of Android 4.1 (most of the APIs in rs_graphics.rsh and the corresponding APIs in android.renderscript). If you have apps that render graphics with Renderscript, we highly recommend you convert your code to another Android graphics rendering option. 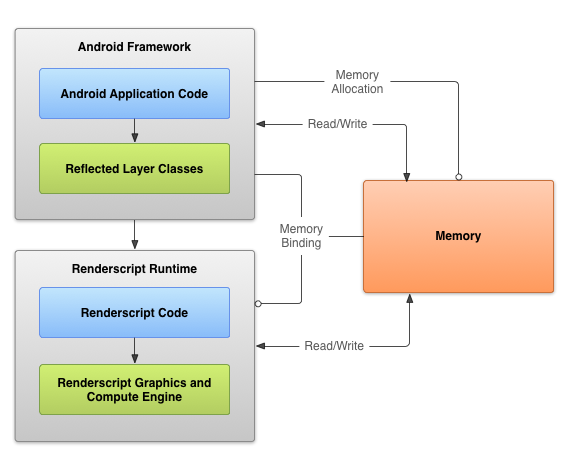 When using Renderscript, there are three layers of APIs that enable communication between the Renderscript runtime and Android framework code:

Because of the way Renderscript is structured, the main advantages are:

The main disadvantages are:

For a more detailed explanation of how all of these layers work together, see Advanced Renderscript.

Renderscripts scale to the amount of processing cores available on the device. This is enabled through a function named rsForEach() (or the forEach_root() method at the Android framework level). that automatically partitions work across available processing cores on the device. For now, Renderscript can only take advantage of CPU cores, but in the future, they can potentially run on other types of processors such as GPUs and DSPs. 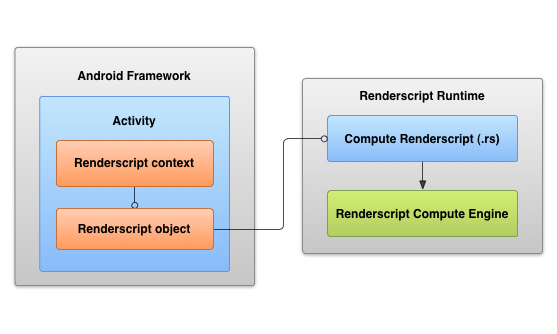 The following sections describe how to create a simple Renderscript and use it in an Android application. This example uses the HelloCompute Renderscript sample that is provided in the SDK as a guide (some code has been modified from its original form for simplicity).

Your Renderscript code resides in .rs and .rsh files in the <project_root>/src/ directory. This code contains the computation logic and declares all necessary variables and pointers. Every .rs file generally contains the following items:

The following code shows how the mono.rs file is implemented:

To call Renderscript at the Android framework level:

The following example, taken from the HelloCompute sample, processes a bitmap and outputs a black and white version of it. The createScript() method carries out the steps described previously. This method calls the Renderscript, mono.rs, passing in memory allocations that store the bitmap to be processed as well as the eventual output bitmap. It then displays the processed bitmap onto the screen:

In this example, assume that the script and memory allocations have already been allocated and bound at the Android framework level and that UserData_t is a struct declared previously. Passing a pointer to a struct and the size of the struct to rsForEach is optional, but useful if your Renderscript requires additional information other than the necessary memory allocations.