A dialog is usually a small window that appears in front of the current Activity. The underlying Activity loses focus and the dialog accepts all user interaction. Dialogs are normally used for notifications that should interrupt the user and to perform short tasks that directly relate to the application in progress (such as a progress bar or a login prompt).

The Dialog class is the base class for creating dialogs. However, you typically should not instantiate a Dialog directly. Instead, you should use one of the following subclasses:

If you would like to customize your own dialog, you can extend the base Dialog object or any of the subclasses listed above and define a new layout. See the section on Creating a Custom Dialog below.

A dialog is always created and displayed as a part of an Activity. You should normally create dialogs from within your Activity's onCreateDialog(int) callback method. When you use this callback, the Android system automatically manages the state of each dialog and hooks them to the Activity, effectively making it the "owner" of each dialog. As such, each dialog inherits certain properties from the Activity. For example, when a dialog is open, the Menu key reveals the options menu defined for the Activity and the volume keys modify the audio stream used by the Activity.

Note: If you decide to create a dialog outside of the onCreateDialog() method, it will not be attached to an Activity. You can, however, attach it to an Activity with setOwnerActivity(Activity).

When you want to show a dialog, call showDialog(int) and pass it an integer that uniquely identifies the dialog that you want to display.

When a dialog is requested for the first time, Android calls onCreateDialog(int) from your Activity, which is where you should instantiate the Dialog. This callback method is passed the same ID that you passed to showDialog(int). After you create the Dialog, return the object at the end of the method.

The best way to define the onCreateDialog(int) and onPrepareDialog(int, Dialog) callback methods is with a switch statement that checks the id parameter that's passed into the method. Each case should check for a unique dialog ID and then create and define the respective Dialog. For example, imagine a game that uses two different dialogs: one to indicate that the game has paused and another to indicate that the game is over. First, define an integer ID for each dialog:

Then, define the onCreateDialog(int) callback with a switch case for each ID:

Note: In this example, there's no code inside the case statements because the procedure for defining your Dialog is outside the scope of this section. See the section below about Creating an AlertDialog, offers code suitable for this example.

When it's time to show one of the dialogs, call showDialog(int) with the ID of a dialog:

If you are using onCreateDialog(int) to manage the state of your dialogs (as discussed in the previous section), then every time your dialog is dismissed, the state of the Dialog object is retained by the Activity. If you decide that you will no longer need this object or it's important that the state is cleared, then you should call removeDialog(int). This will remove any internal references to the object and if the dialog is showing, it will dismiss it.

If you'd like your application to perform some procedures the moment that a dialog is dismissed, then you should attach an on-dismiss listener to your Dialog.

An AlertDialog is an extension of the Dialog class. It is capable of constructing most dialog user interfaces and is the suggested dialog type. You should use it for dialogs that use any of the following features:

The following topics show how to define various properties of the AlertDialog using the AlertDialog.Builder class. If you use any of the following sample code inside your onCreateDialog() callback method, you can return the resulting Dialog object to display the dialog.

To create an AlertDialog with side-by-side buttons like the one shown in the screenshot to the right, use the set...Button() methods:

First, add a message for the dialog with setMessage(CharSequence). Then, begin method-chaining and set the dialog to be not cancelable (so the user cannot close the dialog with the back button) with setCancelable(boolean). For each button, use one of the set...Button() methods, such as setPositiveButton(), that accepts the name for the button and a DialogInterface.OnClickListener that defines the action to take when the user selects the button.

Note: You can only add one of each button type to the AlertDialog. That is, you cannot have more than one "positive" button. This limits the number of possible buttons to three: positive, neutral, and negative. These names are technically irrelevant to the actual functionality of your buttons, but should help you keep track of which one does what. 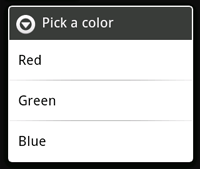 To create an AlertDialog with a list of selectable items like the one shown to the right, use the setItems() method:

First, add a title to the dialog with setTitle(CharSequence). Then, add a list of selectable items with setItems(), which accepts the array of items to display and a DialogInterface.OnClickListener that defines the action to take when the user selects an item. 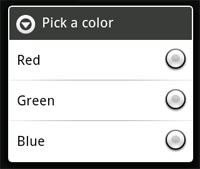 To create a list of multiple-choice items (checkboxes) or single-choice items (radio buttons) inside the dialog, use the setMultiChoiceItems() and setSingleChoiceItems() methods, respectively. If you create one of these selectable lists in the onCreateDialog() callback method, Android manages the state of the list for you. As long as the Activity is active, the dialog remembers the items that were previously selected, but when the user exits the Activity, the selection is lost.

To create an AlertDialog with a list of single-choice items like the one shown to the right, use the same code from the previous example, but replace the setItems() method with setSingleChoiceItems():

The second parameter in the setSingleChoiceItems() method is an integer value for the checkedItem, which indicates the zero-based list position of the default selected item. Use "-1" to indicate that no item should be selected by default.

A ProgressDialog is an extension of the AlertDialog class that can display a progress animation in the form of a spinning wheel, for a task with progress that's undefined, or a progress bar, for a task that has a defined progression. The dialog can also provide buttons, such as one to cancel a download.

Opening a progress dialog can be as simple as calling ProgressDialog.show(). For example, the progress dialog shown to the right can be easily achieved without managing the dialog through the onCreateDialog(int) callback, as shown here:

The first parameter is the application Context, the second is a title for the dialog (left empty), the third is the message, and the last parameter is whether the progress is indeterminate (this is only relevant when creating a progress bar, which is discussed in the next section).

The default style of a progress dialog is the spinning wheel. If you want to create a progress bar that shows the loading progress with granularity, some more code is required, as discussed in the next section.

To show the progression with an animated progress bar:

The setup is simple. Most of the code needed to create a progress dialog is actually involved in the process that updates it. You might find that it's necessary to create a second thread in your application for this work and then report the progress back to the Activity's UI thread with a Handler object. If you're not familiar with using additional threads with a Handler, see the example Activity below that uses a second thread to increment a progress dialog managed by the Activity.

Example ProgressDialog with a second thread

This example uses a second thread to track the progress of a process (which actually just counts up to 100). The thread sends a Message back to the main Activity through a Handler each time progress is made. The main Activity then updates the ProgressDialog.

If you want a customized design for a dialog, you can create your own layout for the dialog window with layout and widget elements. After you've defined your layout, pass the root View object or layout resource ID to setContentView(View).

For example, to create the dialog shown to the right:

After you instantiate the Dialog, set your custom layout as the dialog's content view with setContentView(int), passing it the layout resource ID. Now that the Dialog has a defined layout, you can capture View objects from the layout with findViewById(int) and modify their content.

A dialog made with the base Dialog class must have a title. If you don't call setTitle(), then the space used for the title remains empty, but still visible. If you don't want a title at all, then you should create your custom dialog using the AlertDialog class. However, because an AlertDialog is created easiest with the AlertDialog.Builder class, you do not have access to the setContentView(int) method used above. Instead, you must use setView(View). This method accepts a View object, so you need to inflate the layout's root View object from XML.

To inflate the XML layout, retrieve the LayoutInflater with getLayoutInflater() (or getSystemService()), and then call inflate(int, ViewGroup), where the first parameter is the layout resource ID and the second is the ID of the root View. At this point, you can use the inflated layout to find View objects in the layout and define the content for the ImageView and TextView elements. Then instantiate the AlertDialog.Builder and set the inflated layout for the dialog with setView(View).

Here's an example, creating a custom layout in an AlertDialog:

Using an AlertDialog for your custom layout lets you take advantage of built-in AlertDialog features like managed buttons, selectable lists, a title, an icon and so on.

For more information, refer to the reference documentation for the Dialog and AlertDialog.Builder classes.