This lesson teaches you to

Android provides an XML vocabulary that corresponds to the subclasses of View and ViewGroup so you can define your UI in XML with a hierarchy of view elements.

Separating the UI layout into XML files is important for several reasons, but it's especially important on Android because it allows you to define alternative layouts for different screen sizes. For example, you can create two versions of a layout and tell the system to use one on "small" screens and the other on "large" screens. For more information, see the class about Supporting Different Hardware. 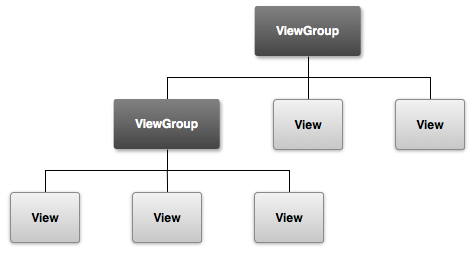 Figure 1. Illustration of how ViewGroup objects form branches in the layout and contain View objects.

In this lesson, you'll create a layout in XML that includes a text input field and a button. In the following lesson, you'll respond when the button is pressed by sending the content of the text field to another activity.

Use a Linear Layout

Open the main.xml file from the res/layout/ directory (every new Android project includes this file by default).

Note: In Eclipse, when you open a layout file, you’re first shown the ADT Layout Editor. This is an editor that helps you build layouts using WYSIWYG tools. For this lesson, you’re going to work directly with the XML, so click the main.xml tab at the bottom of the screen to open the XML editor.

By default, the main.xml file includes a layout with a LinearLayout root view group and a TextView child view. You’re going to re-use the LinearLayout in this lesson, but change its contents and layout orientation.

First, delete the TextView element and change the value android:orientation to be "horizontal". The result looks like this:

LinearLayout is a view group (a subclass of ViewGroup) that lays out child views in either a vertical or horizontal orientation, as specified by the android:orientation attribute. Each child of a LinearLayout appears on the screen in the order in which it appears in the XML.

Because the LinearLayout is the root view in the layout, it should fill the entire screen area that's available to the app by setting the width and height to "fill_parent".

Note: Beginning with Android 2.2 (API level 8), "fill_parent" has been renamed "match_parent" to better reflect the behavior. The reason is that if you set a view to "fill_parent" it does not expand to fill the remaining space after sibling views are considered, but instead expands to match the size of the parent view no matter what—it will overlap any sibling views.

Like every View object, you must define certain XML attributes to specify the EditText object's properties. Here’s how you should declare it inside the <LinearLayout> element:

A resource object is simply a unique integer name that's associated with an app resource, such as a bitmap, layout file, or string.

Every resource has a corresponding resource object defined in your project's gen/R.java file. You can use the object names in the R class to refer to your resources, such as when you need to specify a string value for the android:hint attribute. You can also create arbitrary resource IDs that you associate with a view using the android:id attribute, which allows you to reference that view from other code.

The SDK tools generate the R.java each time you compile your app. You should never modify this file by hand.

android:id
This provides a unique identifier for the view, which you can use to reference the object from your app code, such as to read and manipulate the object (you'll see this in the next lesson).

The plus-symbol (+) is needed only when you're defining a resource ID for the first time. It tells the SDK tools that the resource ID needs to be created. Thus, when the app is compiled, the SDK tools use the ID value, edit_message, to create a new identifier in your project's gen/R.java file that is now associated with the EditText element. Once the resource ID is created, other references to the ID do not need the plus symbol. This is the only attribute that may need the plus-symbol. See the sidebox for more information about resource objects.

android:layout_width and android:layout_height
Instead of using specific sizes for the width and height, the "wrap_content" value specifies that the view should be only as big as needed to fit the contents of the view. If you were to instead use "fill_parent", then the EditText element would fill the screen, because it'd match the size of the parent LinearLayout. For more information, see the XML Layouts guide.
android:hint
This is a default string to display when the text field is empty. Instead of using a hard-coded string as the value, the "@string/edit_message" value refers to a string resource defined in a separate file. Because this value refers to an existing resource, it does not need the plus-symbol. However, because you haven't defined the string resource yet, you’ll see a compiler error when you add the "@string/edit_message" value. You'll fix this in the next section by defining the string resource.

When you need to add text in the user interface, you should always specify each string of text in a resource file. String resources allow you to maintain a single location for all string values, which makes it easier to find and update text. Externalizing the strings also allows you to localize your app to different languages by providing alternative definitions for each string.

By default, your Android project includes a string resource file at res/values/strings.xml. Open this file, delete the existing "hello" string, and add one for the "edit_message" string used by the <EditText> element.

While you’re in this file, also add a string for the button you’ll soon add, called "button_send".

For more information about using string resources to localize your app for several languages, see the Supporting Various Devices class.

Now add a <Button> to the layout, immediately following the <EditText> element:

The height and width are set to "wrap_content" so the button is only as big as necessary to fit the button's text. This button doesn't need the android:id attribute, because it won't be referenced from the activity code.

Make the Input Box Fill in the Screen Width

The layout is currently designed so that both the EditText and Button widgets are only as big as necessary to fit their content, as shown in figure 2.

Figure 2. The EditText and Button widgets have their widths set to "wrap_content".

This works fine for the button, but not as well for the text field, because the user might type something longer and there's extra space left on the screen. So, it'd be nice to fill that width using the text field. LinearLayout enables such a design with the weight property, which you can specify using the android:layout_weight attribute.

The default weight for all views is 0, so if you specify any weight value greater than 0 to only one view, then that view fills whatever space remains after each view is given the space it requires. So, to fill the remaining space with the EditText element, give it a weight of 1 and leave the button with no weight.

In order to improve the layout efficiency when you specify the weight, you should change the width of the EditText to be zero (0dp). Setting the width to zero improves layout performance because using "wrap_content" as the width requires the system to calculate a width that is ultimately irrelevant because the weight value requires another width calculation to fill the remaining space.

Figure 3 shows the result when you assign all weight to the EditText element.

Figure 3. The EditText widget is given all the layout weight, so fills the remaining space in the LinearLayout.

Here’s how your complete layout file should now look:

This layout is applied by the default Activity class that the SDK tools generated when you created the project, so you can now run the app to see the results:

Continue to the next lesson to learn how you can respond to button presses, read content from the text field, start another activity, and more.