Traceview is a graphical viewer for execution logs that you create by using the Debug class to log tracing information in your code. Traceview can help you debug your application and profile its performance.

When you have a trace log file (generated by adding tracing code to your application or by DDMS), you can have Traceview load the log files and display their data in a window visualizes your application in two panels:

The sections below provide addition information about the traceview output panes.

The image below shows a close up of the timeline panel. Each thread’s execution is shown in its own row, with time increasing to the right. Each method is shown in another color (colors are reused in a round-robin fashion starting with the methods that have the most inclusive time). The thin lines underneath the first row show the extent (entry to exit) of all the calls to the selected method. The method in this case is LoadListener.nativeFinished() and it was selected in the profile view. 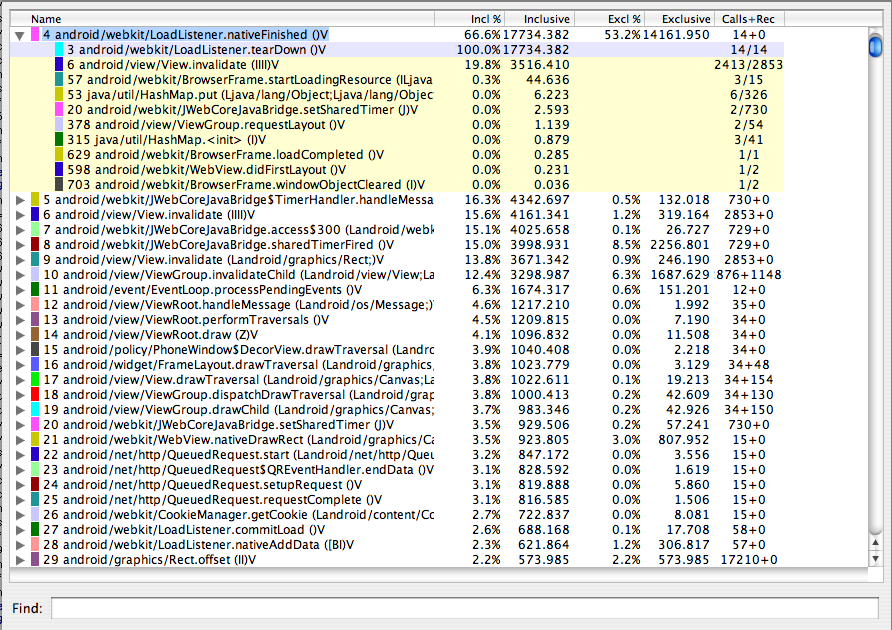 Tracing creates two distinct pieces of output: a data file, which holds the trace data, and a key file, which provides a mapping from binary identifiers to thread and method names. The files are concatenated when tracing completes, into a single .trace file.

Note: The previous version of Traceview did not concatenate these files for you. If you have old key and data files that you'd still like to trace, you can concatenate them yourself with cat mytrace.key mytrace.data > mytrace.trace.

The data file is binary, structured as follows (all values are stored in little-endian order):

The application is expected to parse all of the header fields, then seek to "offset to data" from the start of the file. From there it just reads 9-byte records until EOF is reached.

u8 start date/time in usec is the output from gettimeofday(). It's mainly there so that you can tell if the output was generated yesterday or three months ago.

method action sits in the two least-significant bits of the method word. The currently defined meanings are:

An unsigned 32-bit integer can hold about 70 minutes of time in microseconds.

The key file is a plain text file divided into three sections. Each section starts with a keyword that begins with '*'. If you see a '*' at the start of a line, you have found the start of a new section.

The following list describes the major sections of a key file:

version section
The first line is the file version number, currently 1. The second line, clock=global, indicates that we use a common clock across all threads. A future version may use per-thread CPU time counters that are independent for every thread.
threads section
One line per thread. Each line consists of two parts: the thread ID, followed by a tab, followed by the thread name. There are few restrictions on what a valid thread name is, so include everything to the end of the line.
methods section
One line per method entry or exit. A line consists of four pieces, separated by tab marks: method-ID [TAB] class-name [TAB] method-name [TAB] signature . Only the methods that were actually entered or exited are included in the list. Note that all three identifiers are required to uniquely identify a method.

Neither the threads nor methods sections are sorted.

To use Traceview, you need to generate log files containing the trace information you want to analyze.

There are two ways to generate trace logs:

Before you start generating trace logs, be aware of the following restrictions:

When your application calls startMethodTracing(), the system creates a file called <trace-base-name>.trace. This contains the binary method trace data and a mapping table with thread and method names.

The system then begins buffering the generated trace data, until your application calls stopMethodTracing(), at which time it writes the buffered data to the output file. If the system reaches the maximum buffer size before stopMethodTracing() is called, the system stops tracing and sends a notification to the console.

Interpreted code will run more slowly when profiling is enabled. Don't try to generate absolute timings from the profiler results (i.e. "function X takes 2.5 seconds to run"). The times are only useful in relation to other profile output, so you can see if changes have made the code faster or slower.

When using the Android emulator, you must specify an SD card when you create your AVD because the trace files are written to the SD card. Your application must have permission to write to the SD card as well.

The format of the trace files is previously described in this document.

After your application has run and the system has created your trace files <trace-base-name>.trace on a device or emulator, you must copy those files to your development computer. You can use adb pull to copy the files. Here's an example that shows how to copy an example file, calc.trace, from the default location on the emulator to the /tmp directory on the emulator host machine:

To run Traceview and view the trace files, enter traceview <trace-base-name>. For example, to run Traceview on the example files copied in the previous section, use:

Note: If you are trying to view the trace logs of an application that is built with ProGuard enabled (release mode build), some method and member names might be obfuscated. You can use the Proguard mapping.txt file to figure out the original unobfuscated names. For more information on this file, see the Proguard documentation.

dmtracedump is a tool that gives you an alternate way of generating graphical call-stack diagrams from trace log files. The tool uses the Graphviz Dot utility to create the graphical output, so you need to install Graphviz before running dmtracedump.

The dmtracedump tool generates the call stack data as a tree diagram, with each call represented as a node. It shows call flow (from parent node to child nodes) using arrows. The diagram below shows an example of dmtracedump output.

The usage for dmtracedump is:

Threads
Traceview logging does not handle threads well, resulting in these two problems: