ADT (Android 开发工具) is a plugin for Eclipse that provides a suite of tools that are integrated with the Eclipse IDE. It offers you access to many features that help you develop Android applications quickly. ADT provides GUI access to many of the command line SDK tools as well as a UI design tool for rapid prototyping, designing, and building of your application's user interface.

Because ADT is a plugin for Eclipse, you get the functionality of a well-established IDE, along with Android-specific features that are bundled with ADT. The following describes important features of Eclipse and ADT:

Integrated Android project creation, building, packaging, installation, and debugging
ADT integrates many development workflow tasks into Eclipse, making it easy for you to rapidly develop and test your Android applications.
SDK Tools integration
Many of the SDK tools are integrated into Eclipse's menus, perspectives, or as a part of background processes ran by ADT.
Java programming language and XML editors
The Java programming language editor contains common IDE features such as compile time syntax checking, auto-completion, and integrated documentation for the Android framework APIs. ADT also provides custom XML editors that let you edit Android-specific XML files in a form-based UI. A graphical layout editor lets you design user interfaces with a drag and drop interface.
Integrated documentation for Android framework APIs
You can access documentation by hovering over classes, methods, or variables.

You can find the most up-to-date and more detailed information about changes and new features on the Recent Changes page at the Android Tools Project site.

The Android Asset Studio is a web-based tool that lets you generate icons from existing images, clipart, or text. It also generates the icons with different DPIs for different screen sizes and types.

Many of the tools that you can start or run from the command line are integrated into ADT. They include:

View the segment on the XML editors for more information.

Note: You can edit Android-specific XML files (such as a layout or manifest) in both a graphical mode and also an XML markup mode. You can switch between these modes with the pair of tabs at the bottom of each custom XML editor.

In addition, some special file types that don't have custom editors, such as drawables, animations, and color files offer editing enhancements such as XML tag completion.

In addition to the normal code editing features of Eclipse, ADT provides enhancements to the Android development experience that allow you to quickly jump to declarations of various types of resources such as strings or layout files. You can access these enhancements by holding down the control key and clicking on the following items:

The graphical layout editor is the main screen that you use to visually design and build your UI. It is split up into the following parts:

Outline
On the right side of the editor is the outline view. It displays a hierarchical view of your layout where you can do things such as reorder of views. The outline view exposes similar functionality as the canvas but displays your layout in an ordered list instead of a rendered preview.
Palette
On the left side of the editor is the palette. It provides a set of widgets that you can drag onto the canvas. The palette shows rendered previews of the widgets for easy lookup of desired UI widgets.
Configuration Chooser
At the top of the editor is the configuration chooser. It provides options to change a layout's rendering mode or screen type. 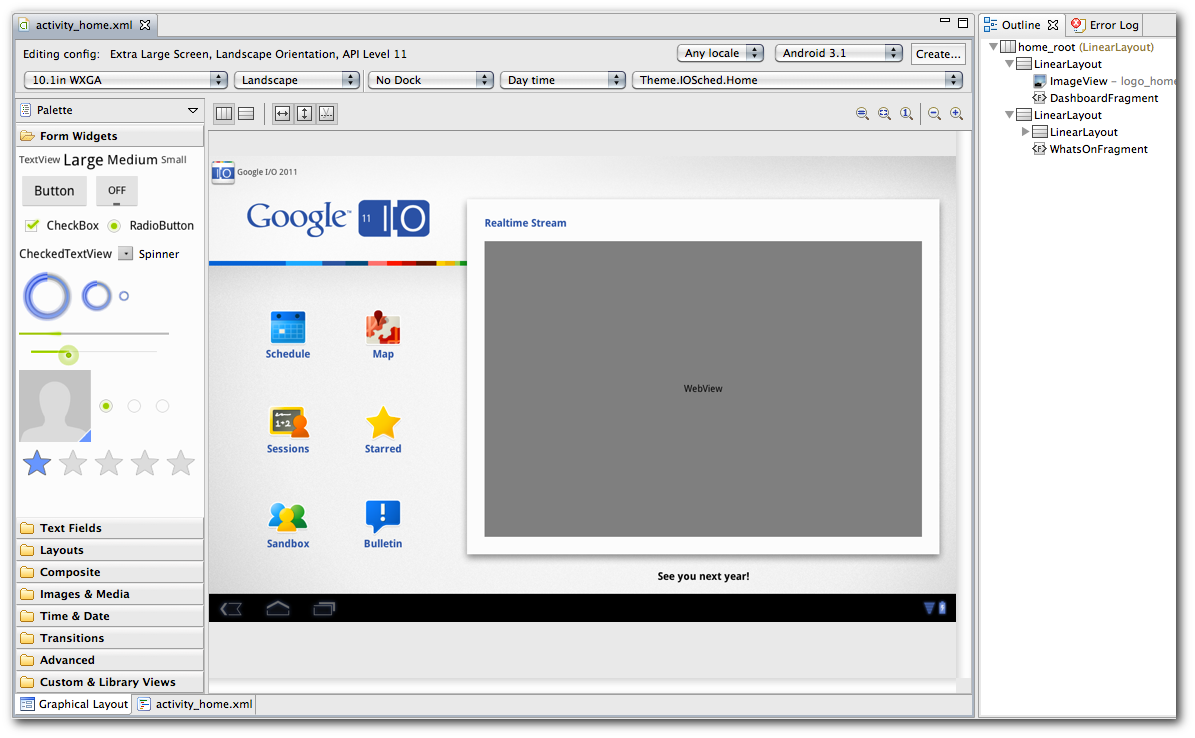 View the segment on the canvas and outline view and the layout actions bar for more information.

The canvas is the area where you can drag and drop UI widgets from the palette to design your layout. The canvas offers a rendered preview of your layout depending on factors such as the selected platform version, screen orientation, and currently selected theme that you specify in the configuration chooser. You can also drag and drop items into the outline view, which displays your layout in a hierarchical list. The outline view exposes much of the same functionality as the canvas but offers another method of organization that is beneficial for ordering and quickly selecting items. When you right-click a specific item in the canvas or outline view, you can access a context-sensitive menu that lets you modify the following attributes of the layout or view:

View and layout properties
When you right-click a view or layout in the canvas or outline view, it brings up a context-sensitive menu that lets you set things such as:
Animation preview and creation
If your layout or view is animated, you can preview the animation directly in the canvas (when you select Android 3.0 or later as the platform version in the configuration chooser). Right-click an item in the canvas and select Play Animation. If animation is not associated with item, an option is available in the menu to create one.

View the segment on the animation features for more information.

Extract as Include
You can extract parts of a current layout into its own layout file, which you can then include in any layout with a single line of XML. See Layout Refactoring Support for more information.

The canvas has additional features not available in the outline view: 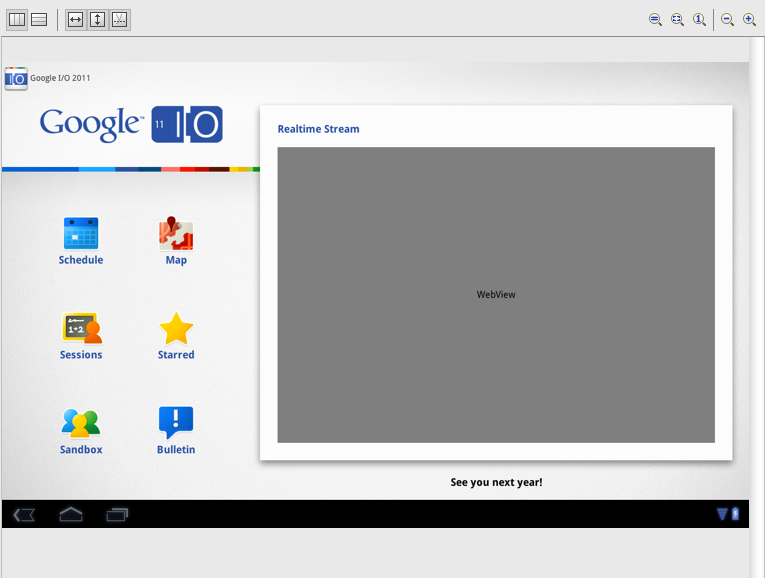 Figure 2. Canvas portion of the layout editor showing a rendered preview of an application 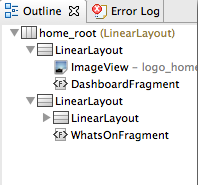 View the segment on the palette for more information.

The palette contains the UI widgets that you can drag and drop onto the canvas and add to your layout. The pallete categorizes the widgets and shows rendered previews for easier lookup. The main features of the palette include:

View the segment on the configuration chooser for more information.

In both the graphical and XML layout editor, there are many features that help you quickly refactor your layouts. The following list describes the major refactoring support:

Change layout
This lets you change the layout on the fly and re-renders the canvas for you. You can apply this refactoring to any layout and the layout is converted to the new type if possible. In many cases, the opening and closing tags of the layout's XML element are changed along with things such as ID attributes and their references. However, for some supported types, ADT attempts to preserve the layout, such as changing a LinearLayout to a RelativeLayout.
Change widget
This lets you select one or more widgets and converts them to a new widget type. In addition to changing the element name, it also removes any attributes that are not supported by the new widget type and adds in any mandatory attributes required by the new widget type. If the current ID of a widget includes the current widget type in its ID (such as a <Button> widget named "button1"), then the ID is changed to match the new widget type and all references are updated.
Extract as include
This lets you extract views inside of an existing layout into their own separate layout file. An include tag that points to the newly created layout file is inserted into the existing layout file. Right-click the view or layout and select Extract as Include....
Extract string
Extract strings from either XML or Java files into their own separate resource file.
Extract style
Extract style-related attributes from a layout and define them in a new styles.xml file. You can select multiple views and this refactoring extracts all of the same styles into one style and assigns that style to all the views that use it.
Wrap-in container
This lets you select one or more sibling elements and wrap them in a new container. This can be applied to the root element as well, in which case the namespace declaration attributes will be transferred to the new root. This refactoring also transfers layout_ attribute references to the new root, For example, suppose you have a RelativeLayout. If other widgets have layout constraints pointing to your widget, wrapping the widget causes these constraints to point to the parent instead.
Quick Assistant
Provides refactoring suggestions depending on the current context. Press Ctrl-1 (or Cmd-1 on Mac) in an editor, and Eclipse provides a list of possible refactorings depending on the context. The Quick Assistant provides fast access to all of the above refactorings, where applicable. For example, if you are editing an XML value and decide you want to extract it out as a string, place the text cursor in the string and press Ctrl-1 to see the refactoring context menu.